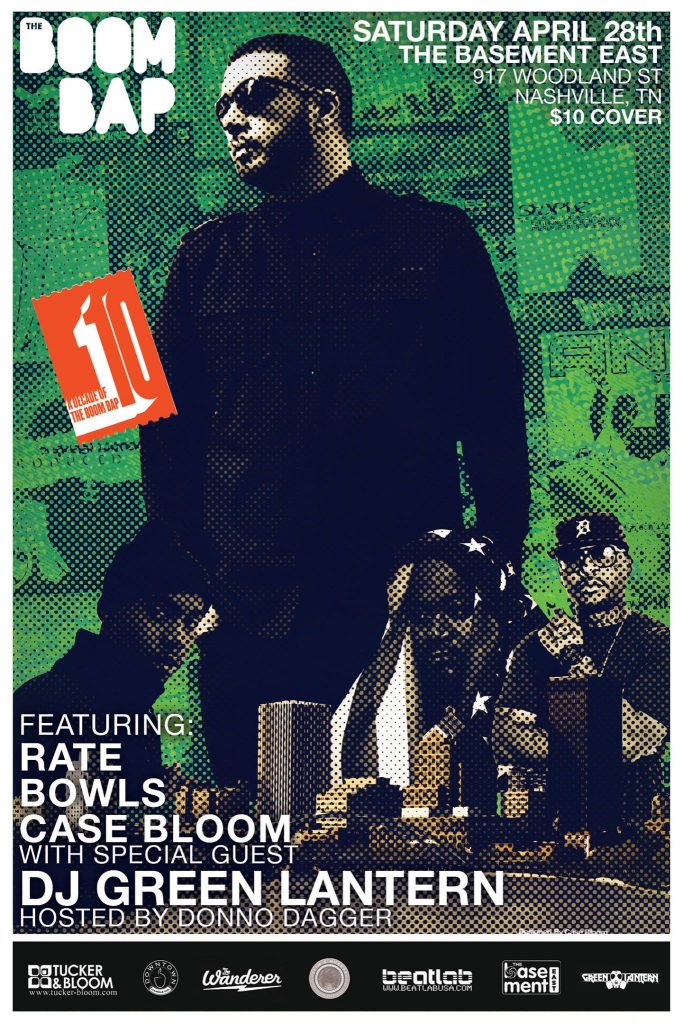 THE BOOM BAP is Saturday April 28th 2018 at The Basement East with special guest DJ Green Lantern
21+ 9pm $10 cover
DJ Green Lantern came to prominence in the late 90’s-early 2000’s with his signature brand of mixtapes..The creativity of these tapes caught the ear of many industry power players, one of which was Eminem. The first set of officially sponsored mixtapes from Eminem’s Shady Records. On the series, spanning three mixtapes (later to be spun off into the Armageddon series), the DJ broke several diss records, furthering the issues between Eminem and Benzino/The Source, as well as the entire Shady camp and Ja Rule/Murder Inc.

He is also recognized as a producer, featuring on his own mixtapes several “Green Remixes,” including, most notably, a remix of the Nas and Tupac Shakur collaboration, “Thugz Mansion.” He also produced D-Block’s “2 Guns Up”, an acclaimed street single, which originated as a freestyle rap on his Hot 97 radio show, “In the Lab” (the most memorable of which has also appeared as a mixtape, “The Best of In the Lab”). “In the Lab” is formatted as a one-hour (with commercials) mix show, in which DJ Green Lantern blends a cappella and instrumental tracks from various artists, as well as breaking new and underground music (such as the Ghostface Killah and El-Producto collaboration “HideYaFace”).

As a member of the Shady Records family, D’Agostino also hosted a show on Eminem’s Sirius Satellite Radio channel, Shade 45, along with an accompanying mixtape released in the fall of 2004. As Eminem’s DJ, Green Lantern was responsible for touring with him and spinning at shows such as the Shady National Convention and The Game’s album release party. Green Lantern’s much anticipated album Armageddon was set to be released under Shady Records, but controversy and an eventual parting would put the release in limbo.

Green Lantern recently put together and mixed the highly anticipated Bar Exam 2 mixtape by acclaimed Detroit MC Royce da 5’9″. Green took over for DJ Premier and Statik Selektah who hosted and mixed Royce’s first Bar Exam Mixtape. The Bar Exam 2 was pushed back several times because of Green Lantern’s inability to mix the tape due to his touring. After several stated released dates, Bar Exam 2 was finally released on September 15 as a free download on HipHipDX.com. Due to the high anticipation of the mixtape, Royce gave the mixtape the slogan “Happy Bar Exam 2, It’s a Holiday” prior to its release.

Together with Mister Cee he is featured as host of the hip-hop radio station “The Beat 102.7” in the video game Grand Theft Auto IV. The station is essentially a replica of Hot 97.[3] Instead of using existing songs, Green Lantern produced the songs exclusively for “The Beat 102.7”