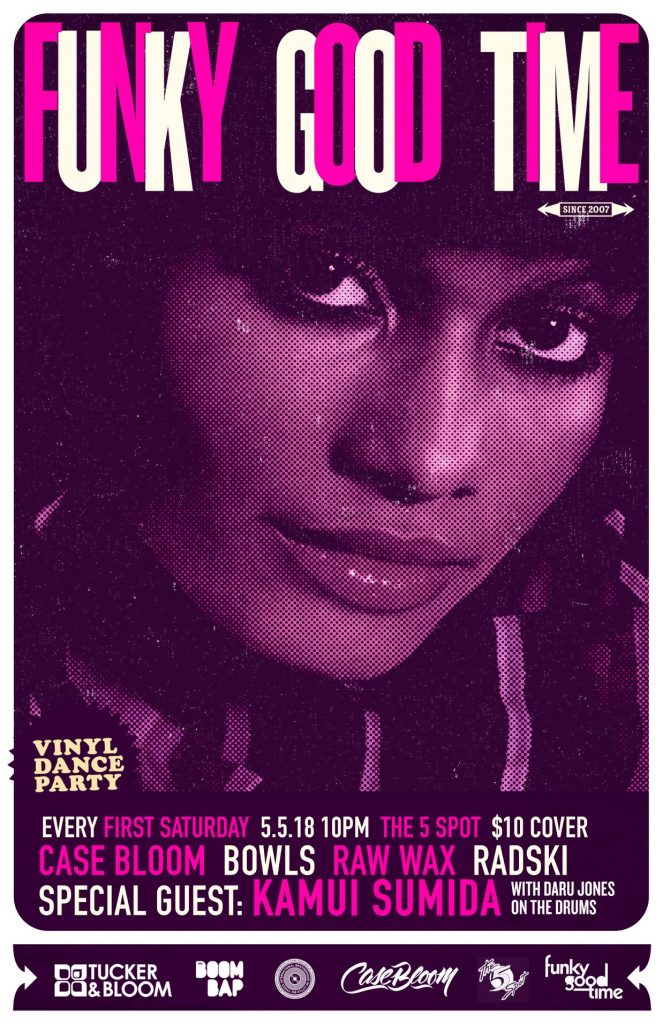 Saturday May 5th 2018 FUNKY GOOD TIME at The 5 Spot! DJs Rad Ski, Bowls, and Case Bloom on the wheels and an opening set by RAW WAX! Daru Jones Official on the drums + Special guest Kamui Sumida is in the house! LET’S DANCE!
——————————————————————
DJ Kamui Sumida ( Hot Peas and Butta/ NYC ) has been spinning and collecting records for well over a decade. Kamui has shared the stage and opened for significant artists, including Talib Kweli, DJ Craze and DJ Krush. Originally hailing from Osaka, Japan, Kamui spent much of his musically-formative years in Seattle Washington, where he hooked up the Seattle record label/art crew known as Fourthcity. Collaborating with friends and fellow DJs Bumble Bee, Hideki Yamamoto, AbsoluteMadman, Introcut & Rei, a legendary weekly Tuesday night called Stop Biting was created – a collective party that has continued strong since its 2004 birth, still going down at the LoFi Performance Gallery in Seattle every Tuesday.

Kamui recently moved to Brooklyn, NY and has been avidly building up his prized collection of rare 45s and funk/soul records. Upon his relocation, he quickly linked up with likeminded collectors and DJs in New York and has rocked parties with pioneers Rich Medina and Q Tip at Santo’s Party House. When Sumida is spinning 45s from his treasured collection, his technical skill is obvious as he nimbly mixes and juggles rare gems and priceless records, never failing to engage any crowd. Kamui continues to steadily rock a variety of esteemed NYC parties, recently sharing the spotlight with the originator of the legendary Hot Peas & Butta party, Skeme Richards. Kamui continues to consistently deliver and receive the heart- and-soul of musical vivacity and quench the thirst to get down no matter the time and stage – and always with a distinguishable dynamism no doubt inspired by the universal groove.