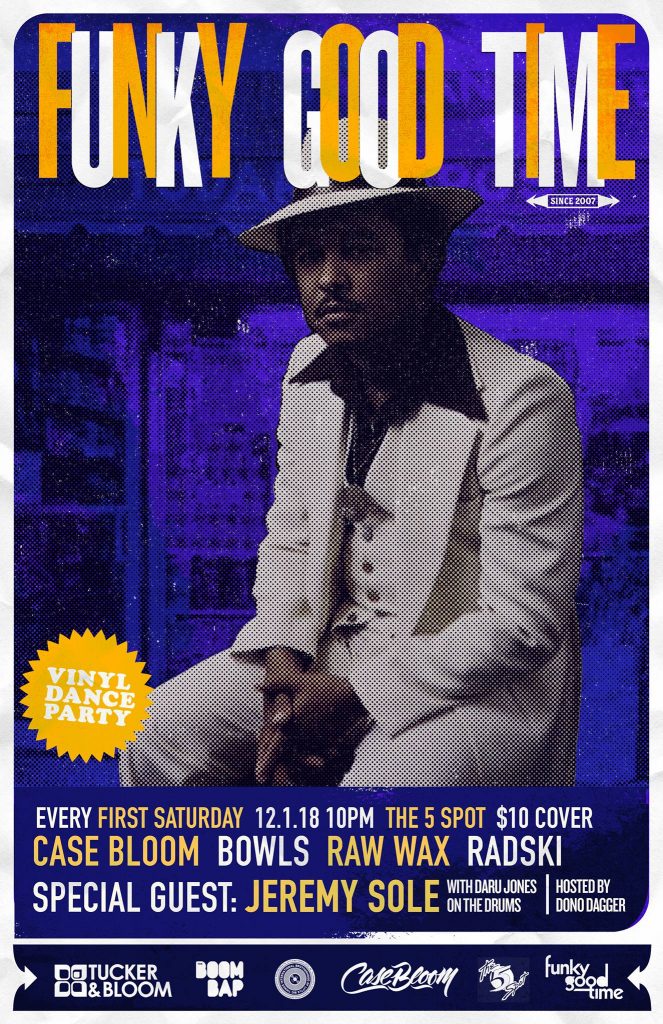 Nashville! Saturday December 1st is the return of FUNKY GOOD TIME at The 5 Spot! 2018 makes 11 Years of the party and we’re excited to be bringing you another year of Funk, Soul, Disco, Latin, Boogie, and R&B records! DJ’s Rad Ski, Bowls, and Case Bloom on the wheels and an opening set by RAW WAX! Daru Jones Official on the drums + Special guest Jeremy Sole is in the house! LET’S DANCE!
——————————————————————
Chicago-born Jeremy Sole has been making beats since the MPC60, deejaying since rotary crossfaders were the standard, and playing clubs since he was too young to (legally) get in. As a teenager, Sole’s loft parties were a culture clash during the birth of Hip Hop and House music. He matured as a turntablist in Jazz, Dub and experimental hybrid bands. Jeremy’s upbringing was seeped in the rich Chicago history of Blues, Jazz, Disco and Funk – and he reveled in that sacred space where they all blend together. As a kid he spent many nights in the alleys behind blues clubs listening through the air vents, before heading downtown to mix at deep Disco loft parties. Meanwhile his obsession grew to include music from every corner of the world. In 2001 Sole moved to Los Angeles, and with his broad musical palette he felt right at home in the spiciest melting pot in the country.

As Co-Founder and resident deejay of “AFRO FUNKÉ”, Sole has drawn a loyal crowd every week for the past 7 years. This is his arena for Afrobeat, Latin, Brazilian and other authentic and remixed world rhythms. Hundreds of international guests have joined him, from deejays Rich Medina and Cut Chemist to impromptu jam sessions with Zap Mama and Stevie Wonder.

Jeremy Sole’s latest creative collaboration with Jamie Strong (Stones Throw / Do Over) fills an aesthetic hole in the Los Angeles nightlife culture. “THE REVIVAL SESSIONS” is a monthly Rhythm & Blues review held in a prohibition-era beachfront speakeasy. Jeremy, who was recently named 2011 Best DJ (Worldwide Awards) by Gilles Peterson, is also the co-founder of theLIFT with Eric “Wiseacre” Tucker. Sole returns to his underground roots with theLIFT – monthly, all-night warehouse events with heavyweights like King Britt and Danny Krivit gracing their stages. What started at his small downtown loft, grew to well over 1,000 people as LA came together to celebrate their one-year anniversary. Since then theLIFT has happened in Miami, NYC and Palm Springs, and now takes place monthly in both San Francisco and LA and was named as one of the top 10 parties in the world (Worldwide Awards).

Jeremy has had the honor of sharing the stage and studio with hundreds of his creative inspirations, including Roy Ayers, Ben Harper, Tony Allen, DJ Shadow, Stevie Wonder, The Meters, Chaka Khan, Seu Jorge, Antibalas, Fat Freddy’s Drop, Parliament, Lee Scratch Perry, Buck 65, Quantic and Joe Bataan. He was the last DJ to open for Ray Charles, deejayed for Sly Stone’s birthday party, and had the distinct honor of mixing at the California Democratic Party’s Election Night Celebration – playing Stevie Wonder’s “Sir Duke” for over 10,000 people at the exact moment when Barack Obama officially became the 44th President.

In April 2006, Sole spent 6 months in the studio producing with Ms. Lauryn Hill. After hearing him mix, she asked if he had ever considered getting into radio, “because this is the music the people need to hear”. A few months later KCRW called to ask him that exact same question, and since then you can tune into Sole every Wednesday at midnight on 89.9 KCRW (archived at www.kcrw.com/jeremysole).

JEREMY SOLE’S MUSAICS, a 9-piece live ensemble, includes members of The Lions, Quantic Soul Orchestra, Mayer Hawthorne and Build an Ark. Miguel Atwood-Ferguson is on violin. Todd Simon leads the horn section on trumpet. Jeremy is on turntables, guitar and MPC – sampling ethnic percussion and sounds from vintage records, writing live arrangements, and juxtaposing it all as musical mosaics, or “Musaics”. It’s an experimental-yet-steady sound that hybridizes elements of Afrobeat, Cumbia, Spiritual Jazz and dubbed-out dancefloor beats. Sole has also produced official remixes for FEMI KUTI, NATURAL SELF, THIEVERY CORPORATION and QUANTIC. In June 2011, Sole’s remix of DAVID BOWIE’S “Golden Years” will be released on CD and vinyl, which features Ticklah and the Daptone family for an all-analog reworking of the 1976 classic.

“Jeremy Sole was a revelation.” – Gilles Peterson (via Twitter, after WMC 2010)

“If I was a DJ full time, I would most likely spin like Jeremy Sole. His mind and soul hears exactly what I hear. He makes Sunset Blvd feel groovy, and that’s hard to do in my book.” – Raphael Saadiq

“Jeremy Sole is a man of good taste & tasteful mixing. Los Angeles is lucky to have him …he’s a goldmine of music.” – Quantic

“Jeremy Sole is not only a world class DJ, but a world class citizen of the world. One of the nicest ugly dudes I’ve ever worked with haha. AND, his beard is great for storing snacks and small tools on those long hot nights in the DJ booth. Jokes aside though, one of my favorite dudes in the game hands down, and a fucking phenomenal talent.” – Rich Medina

“Jeremy is a great DJ, presenter, producer and knower-of-music …an extremely cool dude. I cannot stop listening to his remix of ‘I Put A Spell On You’ …it’s irresistible.” – Henry Rollins

“Jeremy can get your grandma out of her rocking chair & doing the wop, the smurf & the bus stop! Jeremy’s in my top 2 for good Global dancefloor DJs out there.” – Nickodemus

“One of the only successful AND good DJs in LA (those are usually mutually exclusive).” – Peanut Butter Wolf

“Jeremy Sole is one of the consummate tastemakers in the U.S. and a bad ass DJ to boot! I’m honored to have to played alongside him and I’m proud to call him a friend.” – DJ Day