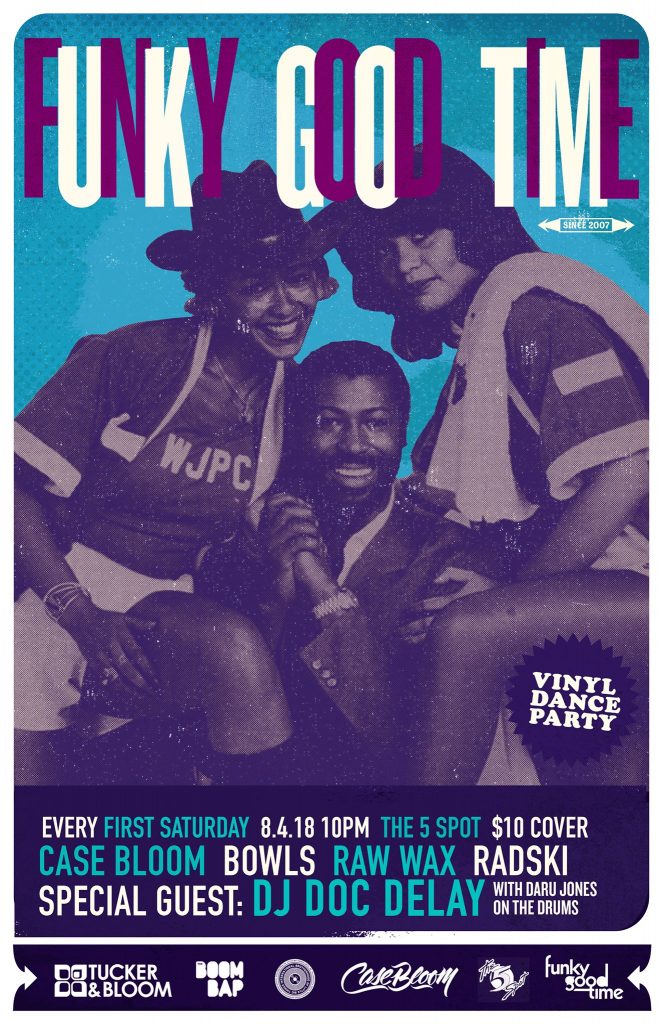 Nashville! Saturday August 4th is the return of FUNKY GOOD TIME at The 5 Spot! 2018 makes 11 Years of the party and we’re excited to be bringing you another year of Funk, Soul, Disco, Latin, Boogie, and R&B records! DJ’s Rad Ski, Bowls, and Case Bloom on the wheels and an opening set by RAW WAX! Daru Jones Official on the drums + Special guest DJ Doc Delay is in the house! LET’S DANCE!
——————————————————————
New York City’s Doc Delay has been DJing and producing professionally for well over a decade. From his early days opening for touring acts including Black Sheep, Large Professor and Hieroglyphics, to playing nights in Manhattan, Canada, Europe and beyond, Delay has been moving the masses playing everything from soul ballads to house classics.

Delay’s production has been featured on releases from Spoon, Prodigy (Mobb Deep), and Kendra Morris. Amassing a world-class record collection, Doc’s critically acclaimed mixes have been praised by The Fader, The New Yorker, Vibe, Wire, WFMU’s Beware of the Blog, and was nominated for The Plug Award’s “DJ Mix of the Year”.

Doc Delay’s projects have been featured in various media including:
The Fader, The New Yorker, Vibe, Wire, WFMU’s Beware of the Blog, and
Perlich’s Picks in Toronto, among others.
————-
Funky records! Live Drummer! Dancing! AIRHORN!!
SATURDAY August 4th. 10PM. $10 COVER.