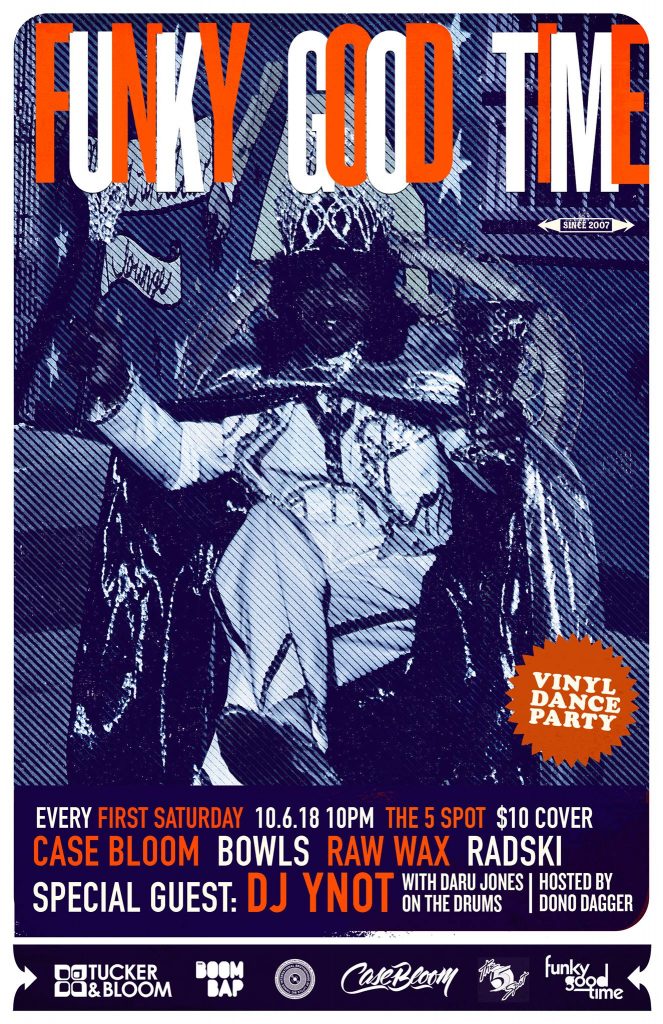 Nashville! Saturday October 6th is the return of FUNKY GOOD TIME at The 5 Spot! 2018 makes 11 Years of the party and we’re excited to be bringing you another year of Funk, Soul, Disco, Latin, Boogie, and R&B records! DJ’s Rad Ski, Bowls, and Case Bloom on the wheels and an opening set by RAW WAX! Daru Jones Official on the drums + Special guest DJ YNOT is in the house! LET’S DANCE!
——————————————————————
The self-proclaimed Renegade of Funk, DJ YNOT has established himself as one of Miami’s finest party rockers. For over a decade YNOT has refined his skills whilst unearthing new and old sounds alike. He has evolved from cutting and scratching records in his bedroom to bringing his record bag all over Florida and beyond.

His ability and dedication to the art form has led him to share the stage with everyone from hip hop legends the Wu-Tang Clan to Britney Spears. YNOT has also played alongside other DJ luminaries such as A-Trak, Peanut Butter Wolf, Kenny Dope, DJ Premier, Pete Rock, Questlove, Rich Medina, KON, DJ Shadow, Cut Chemist, Cosmo Baker, and DJ Craze, to name a few.

The last of a generation YNOT has carved a lane where technical skills and an appreciation for quality music are still accepted. Looking forward he plans on expanding his rep as one of the hardest working DJs. In the future YNOT will expand with ever evolving new sounds providing a breath of fresh air to dance floors in years to come…
————-
Funky records! Live Drummer! Dancing! AIRHORN!!
SATURDAY OCTOBER 6TH. 10PM. $10 COVER.