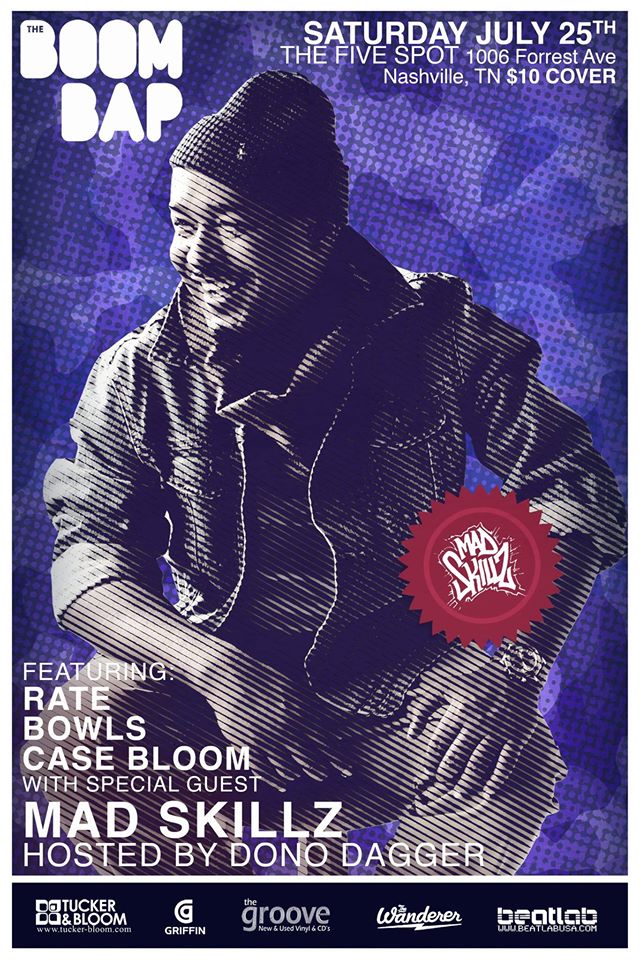 ** The BOOM BAP… 4th Saturdays at The 5 Spot* www.theboombaplive.com

Venerable Richmond, Virginia rapper Mad Skillz is the hip hop head’s hip hop head! He’s the guy who spun on cardboard as a kid, sprayed graffiti, and deejayed by connecting his mother’s turntables together. Never in a million years would he think that years later he would become an in-demand songwriter, producer, artist & deejay! We’re big fan’s of his records and know his rep for wrecking shop! If you’re a head his is not to be missed!

Born in Detroit, Shaquan Lewis, otherwise known as “Skillz” spent time in Fayetteville, North Carolina before landing in Richmond, Virginia. There he attended high school, where he soaked up all the Rakim, Kool Moe Dee, Run-DMC and anything he could get his hands on. “I’ve been a fan of hip hop since day one,” he says. “It always seemed like it was speaking to me directly.” He was a standout English student, honing his rap skills and enrolling in talent shows all over town. Answering an ad in the back of The Source magazine in the mid-90s, he sent in a one minute acapella rap, and won an opportunity to perform at the New Music Seminar in New York City. He finished second in a freestyle competition and drew the attention of Atlantic Records, who quickly signed him.

His 1996 debut, From Where???, which some labeled an underground classic made his name and talents known throughout the hip hop world while his partnership with Atlantic eventually dissolved. Skillz (then known as Mad Skillz) eventually turned to writing raps for others. Before long he was introduced to soon-to-be rap potentate, Timbaland, through their mutual acquaintance Magoo, and Skillz signed with Timbaland’s label. Though nothing would come of the deal, he appeared on albums like, Tim’s Bio and Indecent Proposal, and toured with Missy Elliott in addition to acted as her hype man. Perhaps most importantly, his fellow-Virginian collaborators showed him how to compose a great song. “Before, it was just me rapping – a battle rap, and then maybe a hook,” he says. “But through Missy and Timbaland, I started paying attention to songwriting.”

He next signed to underground label Rawkus Records, where he released his classic track, “Ghostwriter,” detailing his experiences secretly penning tracks for more-famous artists. Turns out he had become a ghostwriter by accident; a fellow DJ heard him recording one day, and said he’d like to use Skillz’s hook and beat for another MC. Eventually, he came to be known as a first-rate lyrical gun-for-hire, and went on to write songs for Diddy and Will Smith. And those are just the artists he’ll name. “A good ghostwriter never reveals all his clients,” he notes, adding: “I’ve definitely made a lot more money on songs that I’ve written for bigger artists, than for myself. Sometimes it makes sense for me to sell a record rather than hold onto it.”

Skillz went on to record six studio albums and in 2002 year he stumbled upon what would become his signature series. Over Thanksgiving, he was in the process of composing a Neptunes-themed mixtape, when a year-end television special came on, inspiring him to do his own hip hop version. Thus was born his famous “Rap Up” tracks, a holiday tradition for 10 years, heard around the country and even on Howard Stern’s radio show. “Do I want to be known just as “The ‘Rap Up’ guy? No. But do I have something that I own, that people want to hear only from me? Yes. It gets bigger and bigger every year.”

He has toured the world as a MC for DJ Jazzy Jeff & recently has stepped back behind the turntables himself. Though most would argue that the hip hop industry has declined in recent years, Skillz has managed to survive for a decade and a half by not embracing every trend. Instead, he emphasizes his old-school roots knowing quality music fans will follow him. These days, that’s a downright original concept.