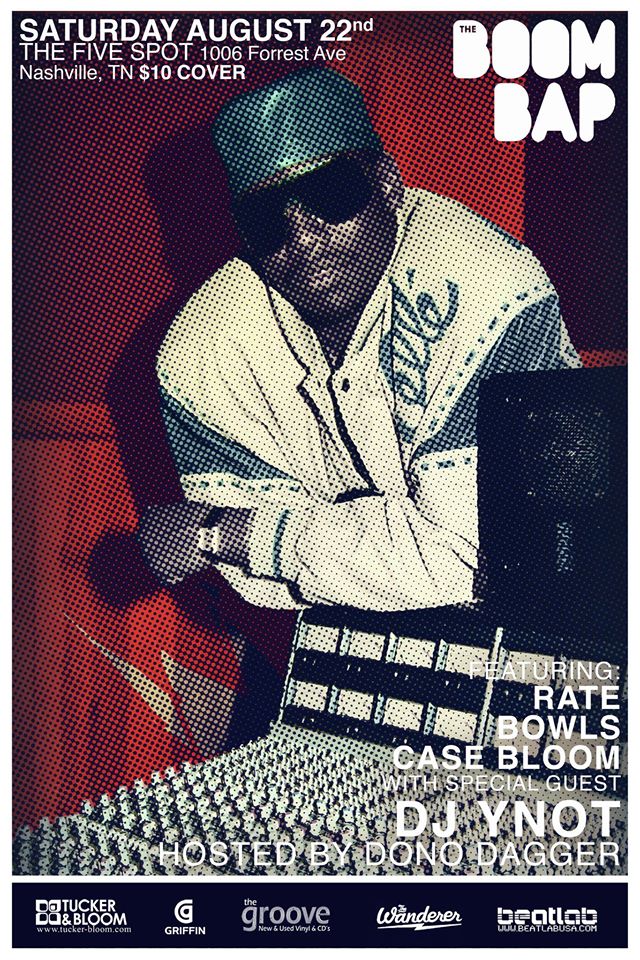 ** The BOOM BAP… 4th Saturdays at The 5 Spot* www.theboombaplive.com

DJ YNOT has been a staple behind turntables for over a decade. His ability and dedication to the art forum along with crowd pleasing selections have lead him to share the stage with everyone from Hip-Hop legends The Wu Tang Clan to Pop Icon Britney Spears. In a quest to push musical boundaries my “turntable wizardry” has earned him the the honor to play alongside such DJ luminaries as A-trak, Peanut Butter Wolf, Kenny Dope, DJ Premier, Pete Rock, Questlove, Rich Medina, Kon, Cosmo Baker, Nu-Mark, Craze, Scratch and Dam Funk among others.

Once upon a time he was a catalyst for the local Orlando scene by promoting and hosting events exposing musical aficionados to international talent and artistry. Held down a two year run at Club Firestone for the infamous Saturday Thursday party. Also honed his skills in the downtown Orlando institution known as the Illustrious Cleo’s Lounge where he spent 7 years holding it down on Wednesdays. In addition helped conceptualize the forward thinking dance party “Lazy Afternoon” dubbed after his well received mix-tape series.

Currently he’s residing in Miami FL and is a fixture behind the turntables @ Bardot, Blackbird Ordinary, Wood Tavern, Coyo, and the Forge. His list of accomplishments in the DJ game are too long and complicated to list here and will be reviled soon in his tell all Novel “#DJLIFE” From day one he’s been dedicated to raising the bar for party rocking and is still on a mission to prove himself one of the hardest working dj’s in the game.