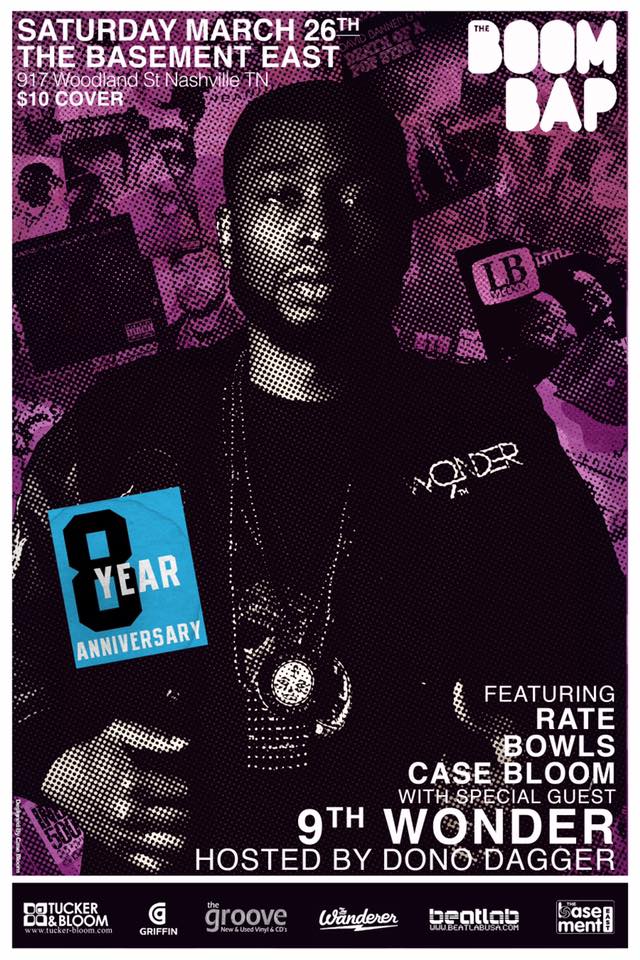 ** The BOOM BAP… 4th Saturdays at The Basement East + The Pub**
www.theboombaplive.com

This month we are celebrating our 8th year of The Boom Bap! We are starting the year off right with a very special guest, a man who needs no introduction, 9th Wonder! We have a lot of big things to announce this year including our relocation to The Basement East! As always, we want to thank everyone for they’re support over the years and for always keeping that dancefloor packed. Cheers!

Born Patrick Denard Douthit in Winston-Salem, NC, 9th Wonder is a Grammy Award Winning Producer, DJ, College Lecturer, and Social Activist. Since his introduction to hip-hop in 1982, 9th has been immersed in the music and culture of the art form, while gaining experience in music theory throughout middle and high school. 9th attended North Carolina Central University, where he decided to pursue a career in music. He, along with Phonte Colerman and Thomas Jones (Rapper Big Pooh), formed the hip-hop trio Little Brother in 1998. The group released the critically acclaimed album “The Listening”, which received 4 mics in Source Magazine.

9th was then tapped to produce a track on Jay-Z’s “Black Album”, which became his first major label placement. From there, 9th Wonder produced 3 songs for the R&B Super group Destiny’s Child on the album “Destiny Fulfilled” (Girl, Is She The Reason, Game Over), won a Grammy with Mary J. Blige for her album “The BreakThrough” (Good Woman Down), Erykah Badu’s “Honey” and “20 Ft. Tall” on the album New Amerykah 1 and 2, Ludacris’ “Do The Right Thang”, a song featuring Common and Spike Lee, and most recently David Banner on the album Death Of A Popstar. 9th will also be working with DRAKE for the second time on his sophomore album release. 9th also has 3 albums with MURS, an Emcee that hails from MidCity, CA, in which all three albums have received critical acclaim.

9th was chosen by Aaron McGruder to score music for the critically acclaimed series “The Boondocks”. He has endorsed companies such as M-Audio Electronics, FL Studio, LRG Clothing Company, and Creative Recreation Shoe Company. 9th Wonder was one of 12 individuals selected by The Pepsi Corporation for the African American Calender, “The First Of Many”. 9th has also worked on an album with Hollywood actor Idris Elba.

He is the president, founder and CEO of It’s a Wonderful World Music Group, which focuses on catering to the 28 to 40 year old demographic of hip-hop music lovers, 9th Wonder hosts a radio show along with Kyle Santillian on Soul 104.5 FM in Fayetteville, NC called “TRUE SCHOOL RADIO” playing the first 24 years of hip-hop, along with 80’s R&B, and New Jack Swing.

9th Wonder and six other individuals founded the True School Corporation in 2006 to celebrate the music, culture, and film of 70’s babies and The Spike Lee Era. In the United States there are millions of Black Americans between the ages of 28-40 that grew up in a time where hip-hop was diverse, informative, and soulful. These same individuals have gone on to become doctors, lawyers, accountants, dentists, etc., and still have a love of what hip-hop used to be. The media has demonized hip-Hop in the last 10 years; so many Black Americans tend to shy away from the picture that the media has created for hip-hop. True School has changed the minds of the generation before us (50’s and 60’s babies) and let them know that emcees such Chuck D, Rakim, KRS ONE, The Native Tongues, Outkast, and countless other has had much of an effect on our lives as our teachers and educators.

9th believes in the preservation of Black Music throughout all its divisions (jazz, gospel, funk, soul, afrobeat, hip-hop), and its connections to music enthnocology and the African diaspora. 9th was recently appointed the National Ambassador For Hip-Hop Relations and Culture for the NAACP by Ben Jealous, President of The NAACP, where he leads a board of PhD’s, Hip-Hop Artists, and Juris Doctorates. 9th was recently interviewed by Neill McNeill of FOX 8 News in The Piedmont, NC, for a segment entitled “NewsMaker”, to showcase North Carolinians who are making a difference in the community. 9th Wonder is also a member of the Universal Zulu Nation, a hip-hop peace organization started by Afrika Bambaataa in 1973.

9th was appointed Artist in Residence by former North Carolina Central University Chancellor James Ammons (now President of Florida A&M University) in the fall of 2006. An Artist in Residence is someone involved heavily in the music industry to conduct a course or seminar of a particular subject. He was approached by Dr. Kawachi Clemons, PhD of Education, to develop a course called “Hip Hop in Context, 1973-1997”, a study of the development and cultural history of Hip-Hop starting with James Brown in the late 1960’s, going all the way to death of The Notorious B.I.G. in 1997. He is now currently an Adjunct Professor at Duke University while still traveling the country lecturing at different universities.

“You have to see one to be one.” Hip-Hop is now making its 20yr generational turn, and there are a new breed of artists who are children of the first hip-hop generation, that have studied that generation’s sound, look, and feel. “If the younger generation…” he continues. With President Barack Obama’s message, and the new movement of hip-hop hipsters… “Along with several colleagues, I plan to have Summits, Festivals, and lecture panel series throughout the year, to show kids the true manifestation of the hip-hop culture and lifestyles,” 9th says.

“Hip-Hop is the voice of at least 2 generations. At one time, it was the POSITIVE voice, as stated earlier. Chuck D was the black history teacher I never had, along with countless other black Americans my age. It can be that again, but with the right voices and the right players. As the late Curtis Mayfield said, “We must educate as well as entertain.”