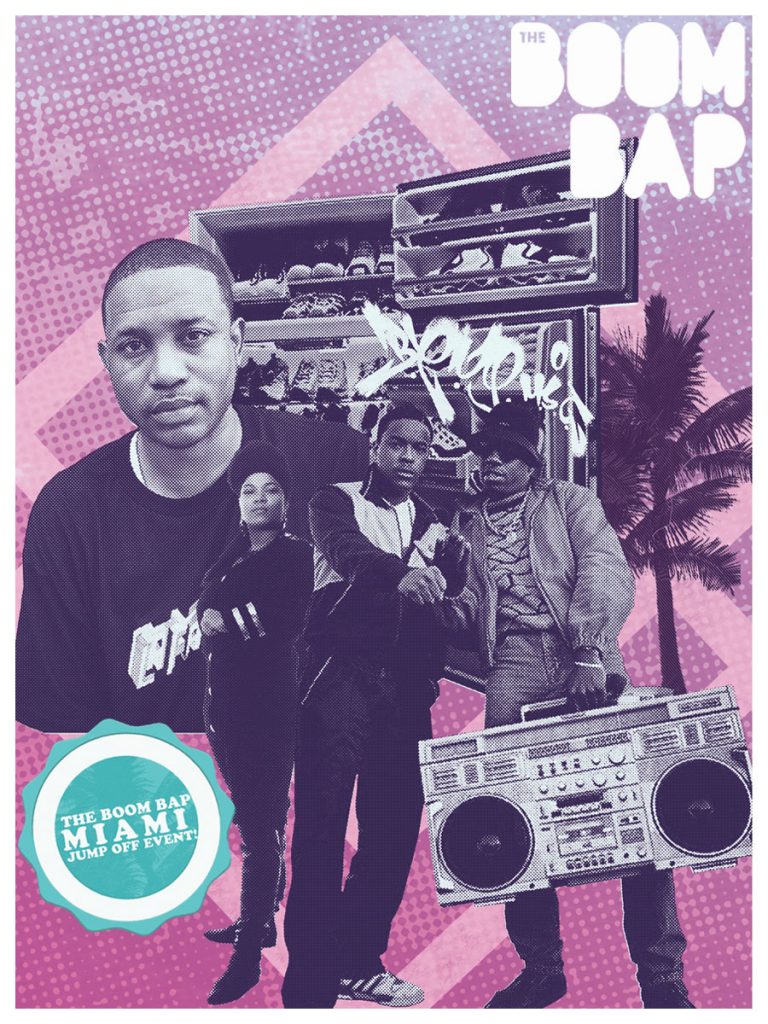 *This month, Nashville’s infamous hip-hop party is coming to Miami…. THE BOOM BAP!!*

THE BOOM BAP:
Beginning as a monthly party in Nashville centered around friends spinning the hip hop records they love THE BOOM BAP quickly became internationally recognized amongst DJ’s and party goers a brand on its own. Local talent spin records round robbin style on 4 turntables with a special guest DJ. Going on its sixth year The Boom Bap returns to Miami this month to follow up their 2012 run at Bardot with DJ Scratch.

DZA:
We’re living in an age where kids around the world grow up dreaming of becoming a famous DJ. But a decade ago, DJing chose Adrian.

The world was different when then 12-year-old DZA inherited his uncle’s record collection. Being a DJ didn’t make you cool, not even in the Paris and Miami scenes young Adrian called home. But he played them anyway.
Disco, hip-hop, punk rock, grunge and r&b – he played it all. He mastered the Technics and learned to read any kind of crowd. He spent his formative years unwittingly preparing for a career as a merchant of cool… and he did it all without a sync button.

At 18, DZA started his first steady gig at Miami Beach’s Purdy Lounge playing the now- infamous Chocolate Sundays – ushering in an new generation of party kids, taking control of hip bookings and learning a lot about the professional club scene.
He later took his knowledge downtown to the Garret at Grand Central, where he began his award-winning PeachFuzz weekly, bringing hip-hop classics to the downtown dance scene in fresh new ways. Ask any downtown kid their favorite place to hang out or dance on a Friday night in Miami, your answer will be one unmistakable word: PeachFuzz.

But he’s more versatile than just hip house and rap music. DZA can rock a top 40 club with deftness and originality that’s sure to please the bottle-poppers and wayward music snobs alike. He says the key to his mixing is speed – never let the crowd rest, but keep them on their toes and dancing. Never a dull moment, DZA prides himself on rollercoaster sets full of mad energy, peaks and valleys, throwbacks and instant classics.

He’s holding down residencies all around the 305, from downtown’s Grand Central to exclusive Miami Beach spots like SL. He’s played the famed Do Over’s Miami edition, released mixes on Diplo’s Mad Decent, and is an official roster artist with Super Music Group. He’s not pretentious about the game, and he’s always looking for a challenge. In the end, he’s down for whatever, and as long his audience is happy – so is he.