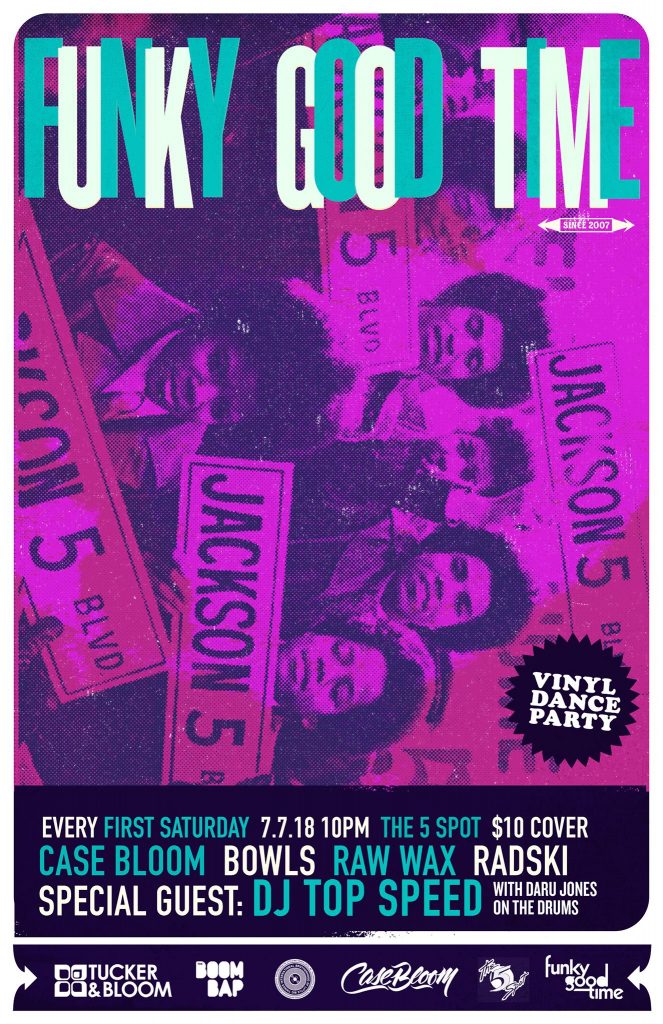 Nashville! Saturday July 7th 2018 is the return of FUNKY GOOD TIME at The 5 Spot! 2018 makes 11 Years of the party and we’re excited to be bringing you another year of Funk, Soul, Disco, Latin, Boogie, and R&B records! DJ’s Rad Ski, Bowls, and Case Bloom on the wheels and an opening set by RAW WAX! Daru Jones Official on the drums + Special guest DJ Topspeed is in the house! LET’S DANCE!
——————————————————————
DJ Topspeed, a fixture in the Indianapolis scene for 22 years, learned his chops in the early days of hip-hop, listening to intense Dr. Dre mixes and assembling his own. He earned his stripes in that most unforgiving of venues: the skate palace, spinning for years at the Melody Skateland.

He’s come a long way since then with many DJ battle championships under his belt, more than 100 DJs formed under his tutelage and constant promotion of event after event.

Topspeed’s philosophy combines the classic issue of balancing the popular and the new with an intense devotion to technical detail.

“I stick to the rule of playing what’s popular and putting my own take on it, maybe mixing them together or mixing in a beat nobody’s ever heard before,” he says. “There are a lot of people who DJ, and their skill level doesn’t really speak well for themselves; they try to mix, but it’s not in the same key, or they’re not paying attention to their beats per minute.”

Topspeed’s signature routines still hearken back to those old Dre mixes and rock/pop/R&B/soul compositions going back to the 1980s.

“I’ve got about 500 killer mixes that people won’t get tired of — signature routines that I’ve been doing since I started,” Topspeed says. “It’s real physical, spinning and throwing the records around. I keep trying to invent more.”