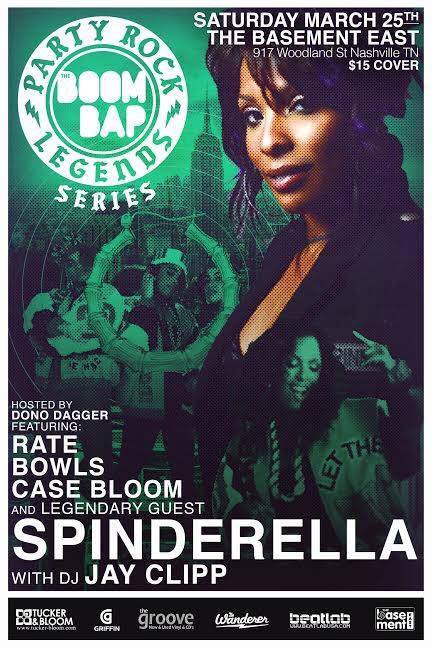 *** The BOOM BAP … 4th Saturdays at The Basement East ***
www.theboombaplive.com

This month marks the first of a series we are starting called “The Legends Series.” This series will consist of guest DJ’s that we feel have made above average accomplishments in their careers and are considered Legends in the game. We are SO happy to present your legendary guest DJ this month…. DJ Spinderella of Salt N Pepa!

Dee Dee Roper, internationally known as DJ Spinderella, is a Grammy award winning DJ, producer, rapper, writer and world class mother. Spinderella is one of the original pioneers of hip hop music beginning her career as a member of the iconic rap group Salt-N-Pepa, selling over 15 million albums and singles worldwide.

Roper was introduced to Salt-n-Pepa producer Herbie “LuvBug” Azor just before the group were due to appear at the Westchester Music Festival in 1986. Salt-n-Pepa’s original DJ, Latoya Hanson, had missed several rehearsals and group appearances, and the group was actively looking for a replacement.Before auditioning Roper, Salt-n-Pepa had offered the spot to then-unknown radio and TV personality Ricky Lake.Roper was selected as the group’s DJ, taking the name Spinderella, around the time the group’s first album was being released. Since she was sixteen at the time of joining, Ropers’ parents had to give permission for Roper to travel around the country. The trio would go on to become one of the most successful female hip-hop acts of all time. They released five studio albums and saw several platinum and gold singles. Spinderella has also produced several songs on the group’s albums. The group disbanded in 2002, before reforming in 2007.

From 2003 to 2006, Spinderella worked as a radio personality on the now-defunct KKBT 100.3 in Los Angeles, California, cohosting “The BackSpin”, a nationally syndicated weekly radio show featuring old school hip-hop. She also appeared on several episodes of the VH1 reality series The Salt N Pepa Show. From September 2010 to March 2011, Roper did middays at KSOC-94.5 “K-Soul” in Dallas, Texas. Spinderella is part of the American Diabetes Association Celebrity Cabinet, a TV ONE UnSung Ambassador, supporter of Saving Our Daughters Mentoring Program, and founder of the Spinderella DJ Academy.

She appeared briefly on VH1’s first annual Hip Hop Honors in November 2004, with her group members, but they did not perform. All three members did perform on the second Hip Hop Honors on September 22, 2005. This was their first performance as Salt-N-Pepa since 1999. In 2007, she acted as DJ for The Comedy Central Roast of Flavor Flav. On October 23, 2008, the group performed their hit singles “Shoop”, “Push It”, and “Whatta Man” at the 2008 BET Hip Hop Awards. DJ Spinderella replaced temporary DJ Wendy Williams (The Wendy Williams Show) during Salt-N-Pepa’s performance of “Push It”, first airing December 18, 2015.